Ask any teenager in your family – dating is hard! It’s also difficult for archaeologists, but we’re talking about a different kind of encounter!

When archaeologists want to learn more about the history of an ancient civilization, they dig deep into the ground, looking for tools and artifacts to tell the story.

But once a bone, fossil, or ornament is found, have you ever wondered how scientists determine the age of this thing?

Well, there are many techniques that researchers, scientists and archaeologists use and here are just a few …

Why not unearth more stories … 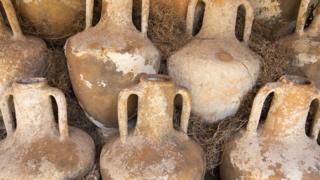 Looking at the design of objects, like these Roman pots, can explain a lot about their age.

When experts dig up objects, they often look at the objects around the object and how deep they are in the ground. Some things like pottery, art or tools are specific to certain periods, like the Roman era for example.

By looking for things like this, you can sort of determine the period of origin of the object.

However, new technology means that there are many other ways to determine the age of something.

Carbon dating is a way to determine the age of something biological. It means things like bones, tissue, wood, and plants with a fairly recent history, around 50 to 70,000 years old. Believe us, this is quite new compared to some things like dinosaur fossils!

So how does carbon dating work?

It sounds very technical, but cosmic rays, which are radiations from space, are entering the Earth’s atmosphere every day. For example, people and plants are constantly being hit by the rays, but don’t worry, they are perfectly safe. As part of the process, cosmic rays create something called carbon-14.

Atoms combine with oxygen to form carbon dioxide, which plants take up naturally. Animals and humans eat plants and carbon 14 enters animal and human bodies, when humans and animals die, carbon 14 can still be found as a radioactive material called radiocarbon. 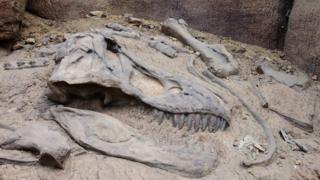 Since dinosaur fossils are very old, scientists examine layers of rock around them to determine their age

How do you age dinosaur fossils?

It is difficult to determine the age of dinosaur fossils because they are really, really old. This means that carbon dating will not work.

Millions of years ago, when a dinosaur died, its body was often covered in sand and dust, called sediment. Over time, the sediment and bones gradually turned into rock.

Unfortunately for paleontologists, the scientists who dig up dinosaur bones, sedimentary rock does not contain the radioactive material they need to determine the age of something.

So, to determine the age of dinosaur fossils, paleontologists must find other types of rocks nearby. One type of rock whose age is easier to tell is volcanic ash. The layers of volcanic ash in the rock act as bookends – giving a beginning and an end to the period of formation of the fossil. 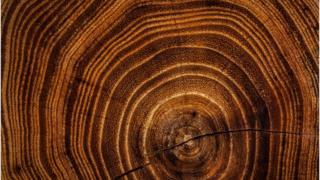 Dendrochronology is a scientific method that examines the rings of the wood of trees.

If you look at a tree stump or a piece of wood, you may have noticed that it has rings and patterns. Rings are created as the tree grows and ages. They provide a natural model of life that scientists can then examine and determine the year in which each ring grew.

This is a very useful tool when trying to find the age of buildings and works of art that contain wood.

So how can scientists determine the life years of a tree?

The same type of trees, growing in the same area at the same time, will have corresponding characteristics. It can be things like thickness and color.

In doing so, scientists can look at many records of environmental changes, such as very hot or humid weather, and determine when the tree lived and when it experienced these conditions. 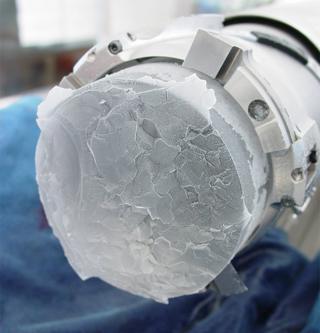 Just as archaeologists dig into the ground to learn more about different periods in time, scientists who study Earth’s climate, called paleoclimatologists, take a similar approach.

However, instead of digging into the ground, they are looking for clues to our planet’s climatic history by studying coral reefs, digging into the bottoms of oceans and lakes, or drilling deep into glaciers and ice caps. .

Ice caps and glaciers near the North and South Poles have formed after years and years of snowfall, the snow is squeezed by several layers of snow and eventually forms thick layers of ice. In some areas, these layers form ice caps several kilometers thick.

Scientists drill deep into the ice to take samples, each layer of ice tells a story about what the Earth looked like when that layer of snow gently landed on the ice. These layers of snow that formed into layers of ice contain particles of dust, ash, and even pollen that were all in Earth’s atmosphere at the time.

Surprisingly, these particles remain in the ice for thousands of years and reveal information about past world events and more recently about the impact of climate change.